What can we say, we’ve already fallen in love with Cambodia. We had several people tell us that Cambodia is one of their favourite counties in SE Asia, and we can confirm, the country is living up to the hype. The people are incredibly nice, the cities are very green, easy to walk around, and have more charm in general than other cities we’ve visited. We arrived in Phnom Penh after an overnight sleepless layover in Singapore. We hopped into a tuk-tuk that trekked us into the city centre for $7.00.

We booked our 4 day stay with Sary’s Guesthouse and were greeted by Sary himself. The guesthouse we are pleased to report is clean and spacious, it has good coffee and filling meals. We ate breakfast at Sary’s place everyday and although the heat might have contributed, we never found ourselves hungry until late afternoon.

That first day in Phnom Penh we stayed in as we were in desperate need of some rest. Knowing that we wouldn’t be there over the following weekend we did venture out to the weekend night market. The market, like many others we’ve visited is a mix of retailers and food vendors. This market was a bit different however because instead of having the more traditional plastic tables and chairs to eat your cheap, tasty bits at, they instead had rows of rugs for shoeless diners to sit cross legged at to eat their local delights. The following day however we made full use of our legs by walking to majority of the tourist attractions. On a side note, it wasn’t until day two that we actually started pronouncing the city’s name correctly p-nom pen phonetically speaking. 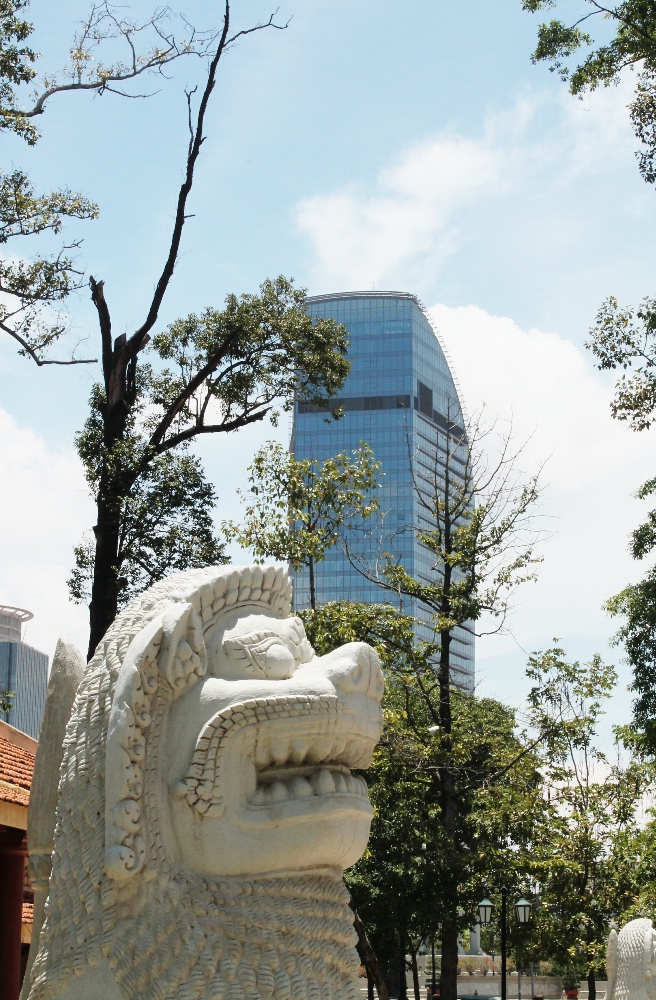 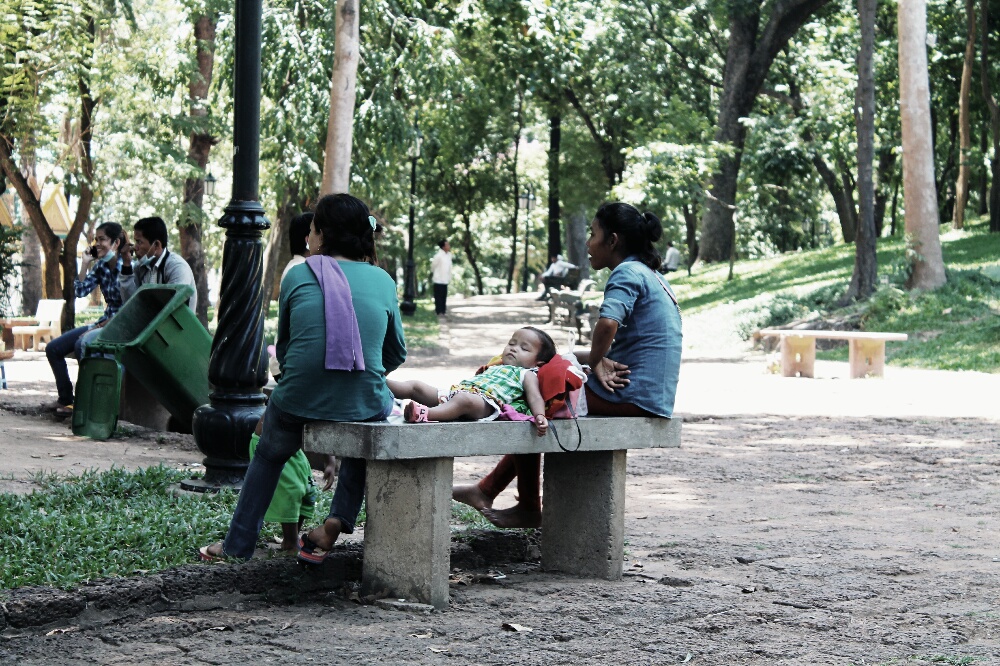 The river is the life of Phnom Penh and many points of interest are mentioned in relative distance to the Mekong River. We began our journey there soon making our way to our first Cambodian temple; the Phnom Wat. I don’t mean to sound disrespectful, but once you’ve seen as many temples as we have, they start to lose their appeal. That said, I’m sure we will eat our words when we get to see Angkor Wat in Siem Reap, but that’s for a future post.

Next we made our way to the Central Market. For brevity sake, I’m going to combine the review with the other markets we visited; Orussey and Russian Markets. Nowhere in the Western world will you find such chaotic markets I’m sure of it. They are truly over stimulating places filled with craft and interesting finds, as well as interesting and sometimes intrusive smells and sights. To give you a picture of what I’m talking about, imagine a potpourri blend of overly fragrant fish, whilst viewing the decapitation of several flounders and animals and seeing faux Mac make-up and designer wears in the horizon. You shouldn’t miss it. 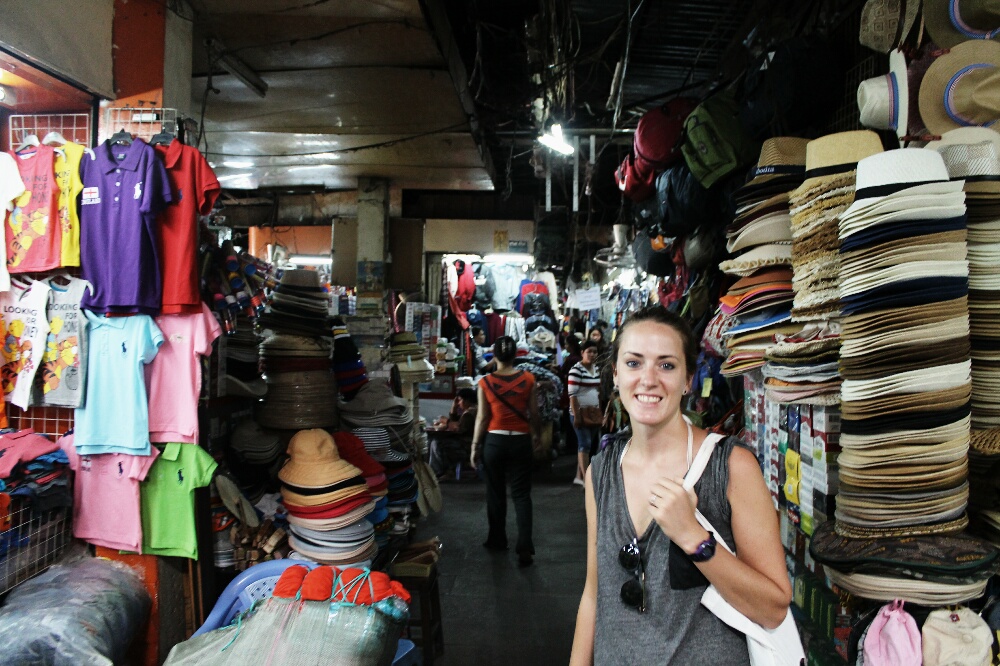 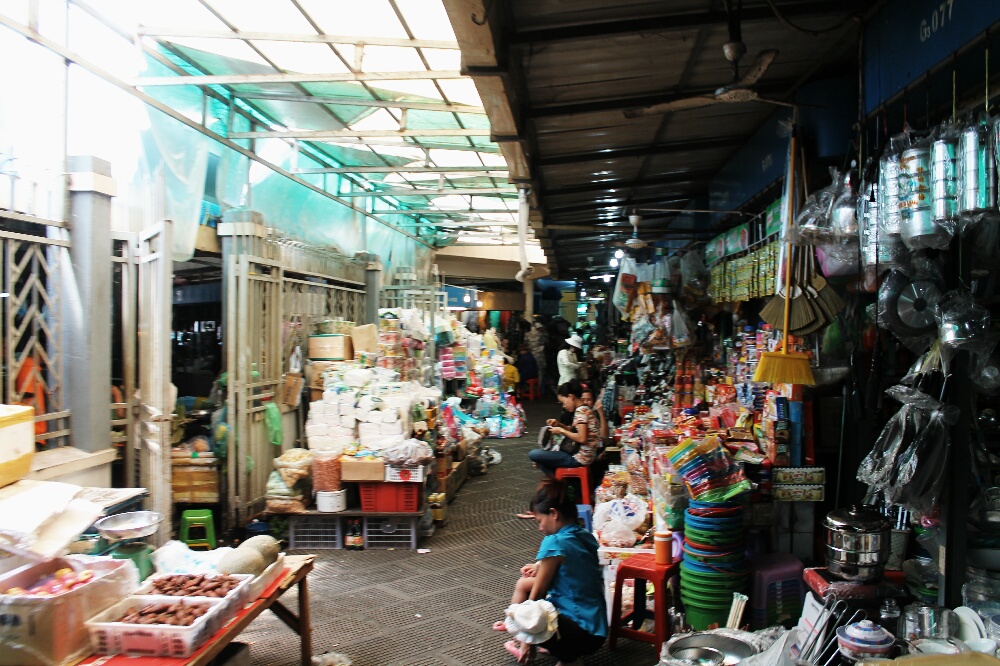 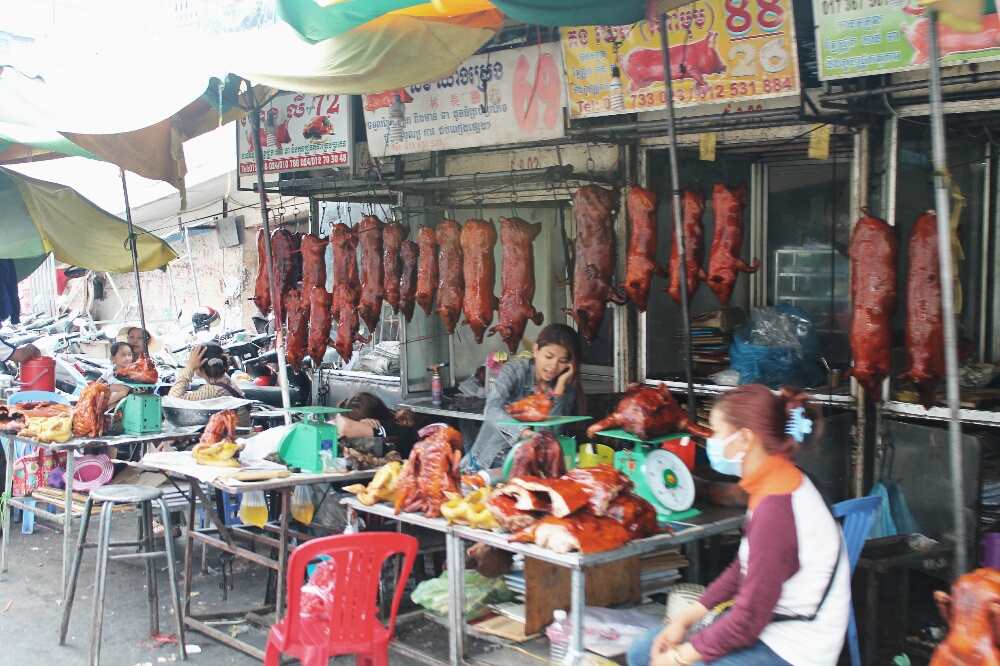 The National Museum, Royal Place and Silver Pagoda are all within a stones throw of each other. We did visit these attractions, but only from the outside. We heard some mixed reviews about adding the cost to a backpacks budget for actually making your way inside these attractions. We may have missed out, but to save ourselves some dosh, we opted to only view the structures from the outside. I think this is a good time to mention the extreme heat in Cambodia. When we made our way to the palace we were dripping in sweat, determined to walk instead of taking up any of the many many tuk-tuk drivers that had offered us their services. We feel okay with our decision and instead spent the money on cheap jugs of beer and food. Musson ate stir-fried veggies with frog and I stuck to veggies. He says it tastes like chicken for any adventurous carnivorous out there. 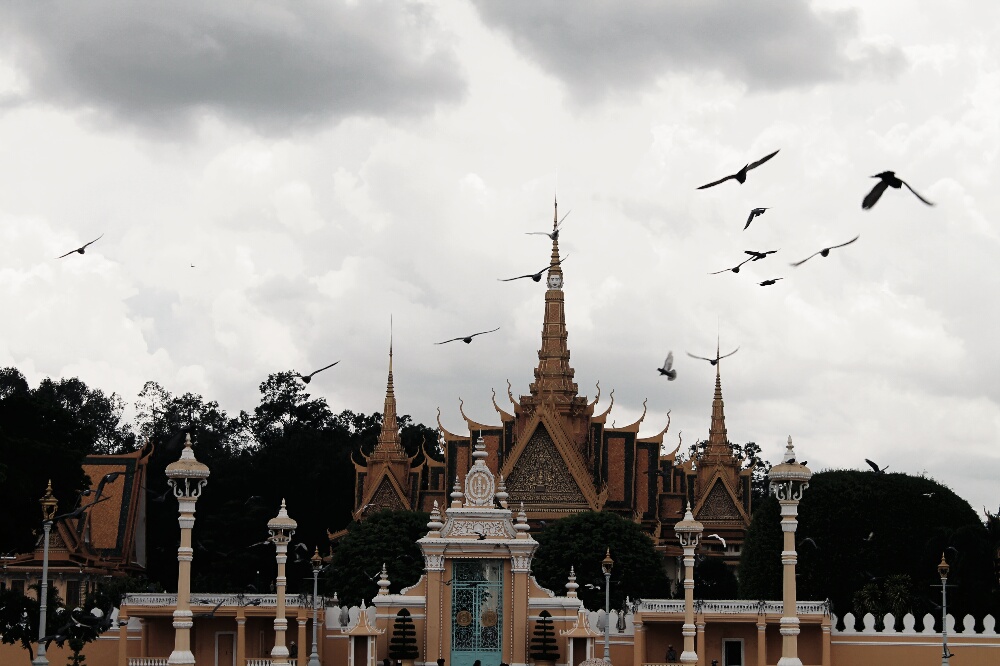 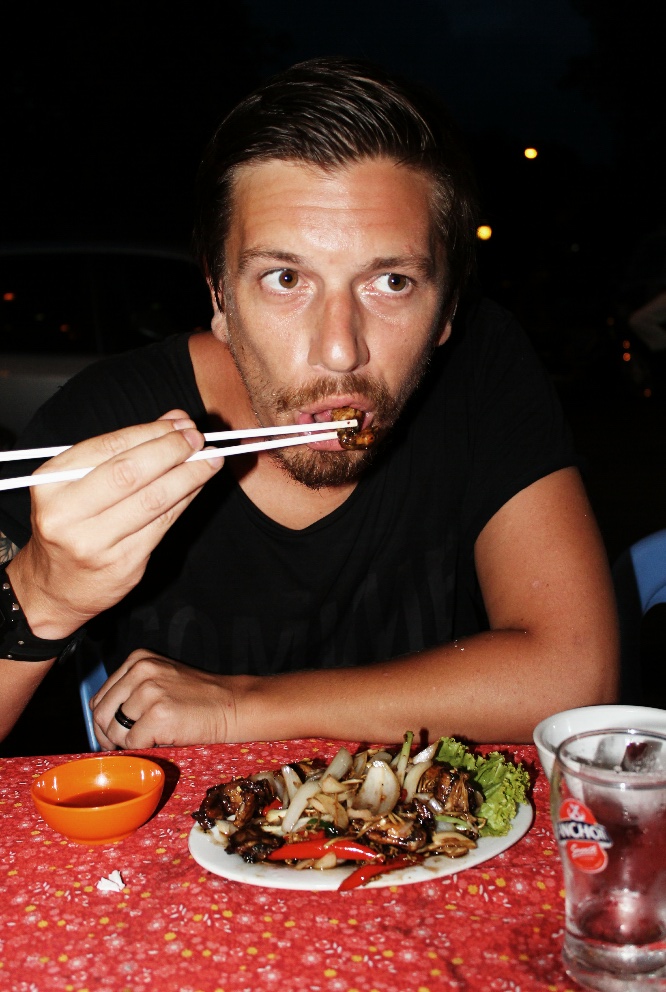 That night we visited any movie-buffs dreamland, the Flicks Movie-house. It combines the comforts of watching a movie on your own turf with the surround sound, air-conditioned atmosphere of a real movie theatre…only better! It’s a loungers dream because the first two rows as comfy as possible with futon mattresses and pillows. If it couldn’t get any better, you are served a giant bowl of popcorn, salted to the max. For $3.50 per day you can watch as many movies as you want and we got a free beer each at the rooftop bar with our tickets. We saw Good Morning Vietnam, which seemed not only fitting because Vietnam is next on our county itinerary but also because of the sad news of Robin Williams death. Later that evening we watched The Killing Fields which set the historical pretext for our tour the next day. 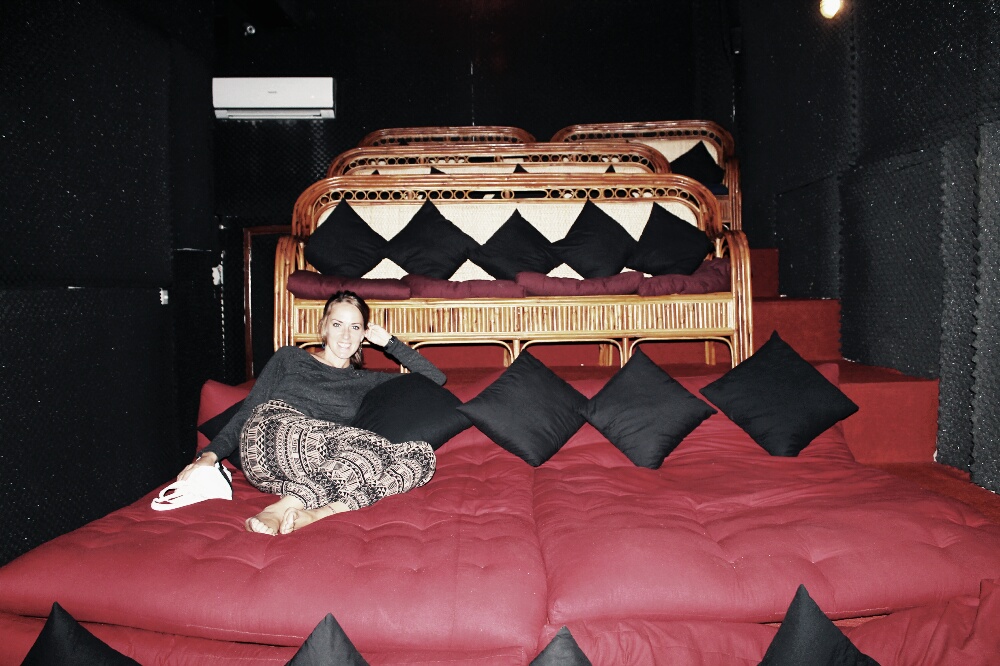 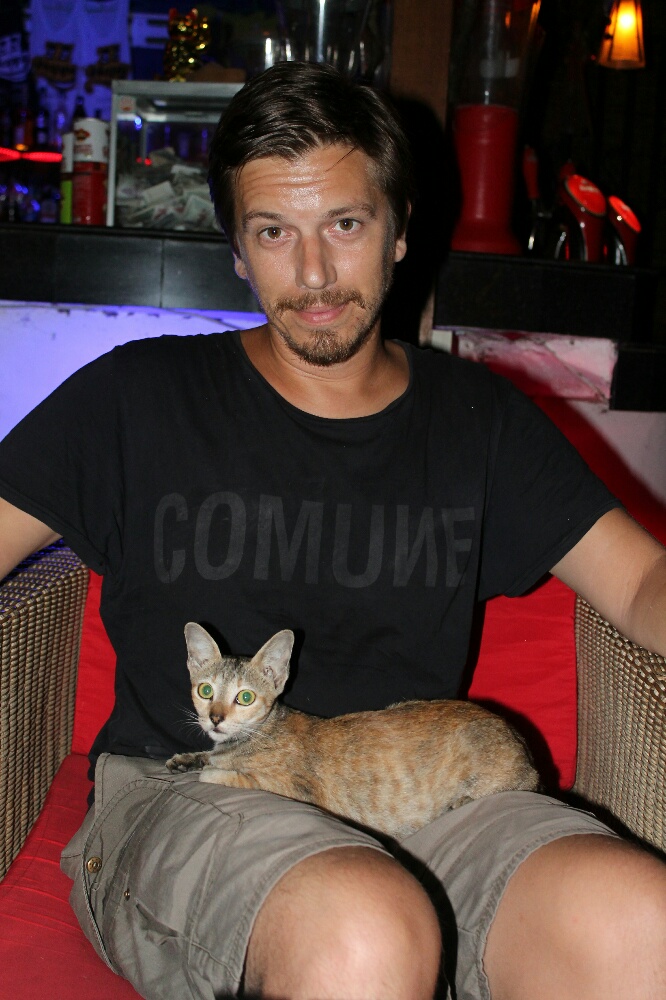 Anyone rich in historical knowledge will know full well the struggles this country endured in the 1970s. We were only marginally aware of the political and human struggles faced by Cambodians before this trip. The second day in Phnom Penh hired a tuk-tuk for $20 to take us around to learn more about the Khmer Rouge- the communist organisation under the rule of Pol Pot, responsible for the genocide of the Khmer people in the 1970s. In essence, they wanted to eradicate the free-market from Cambodia and return to a way of life whereby the people would live in a ‘purely agrarian society’. There would be no education or formal institutions of any sorts. Their approach for creating this societal change was horrific to say the least.

Our first stop was at The Killing Fields, one of the many scattered throughout the countryside. It was a place where city-dwellers, intellectuals, professionals, free-market supporters, or really anyone who wasn’t a part of the Khmer Rouge (although several of them as well) were taken to be murdered. 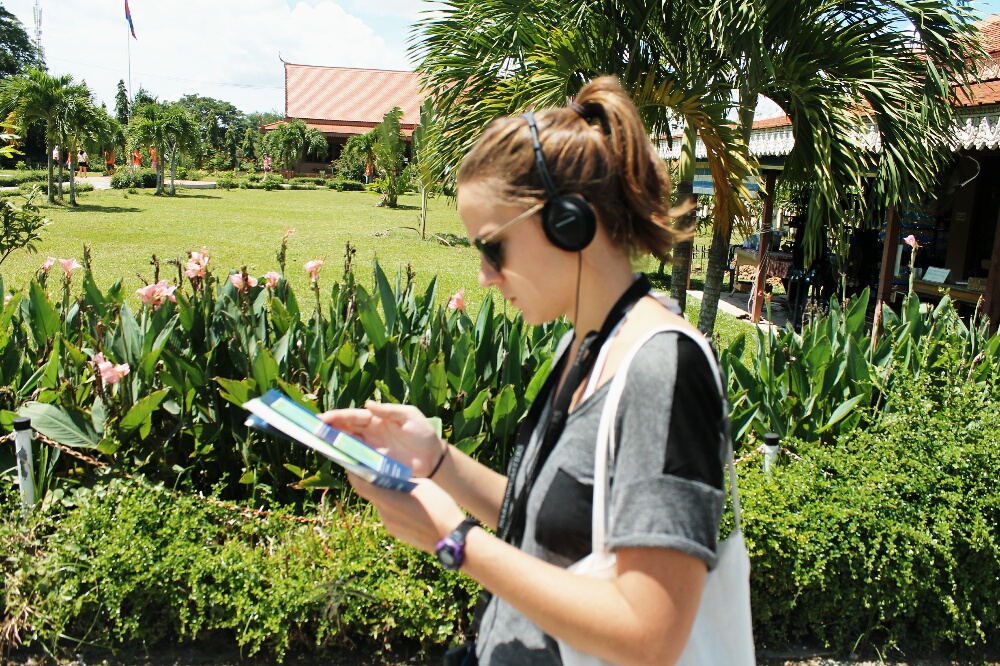 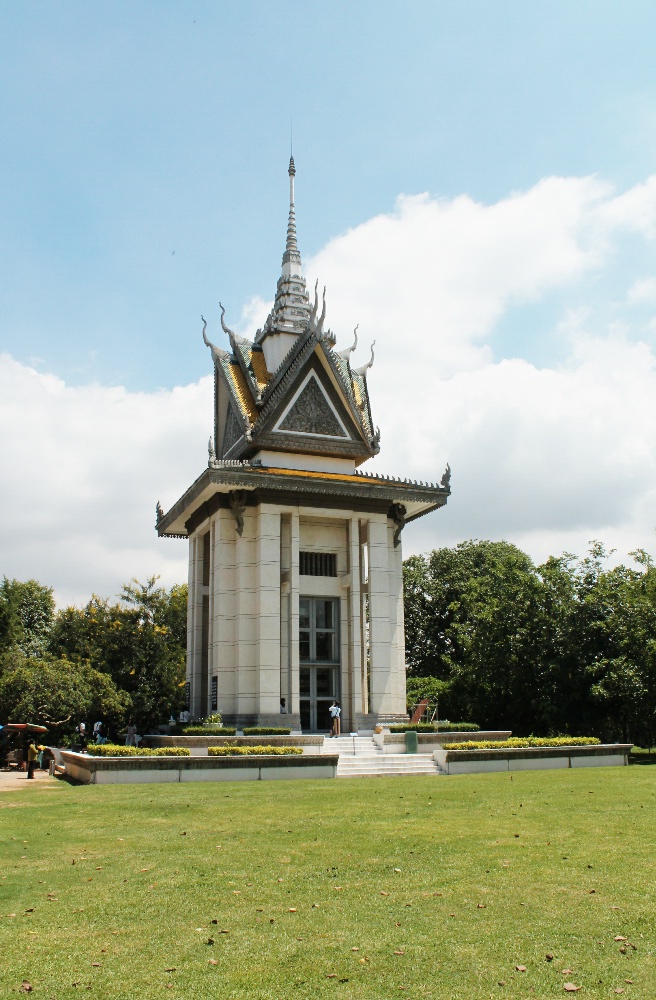 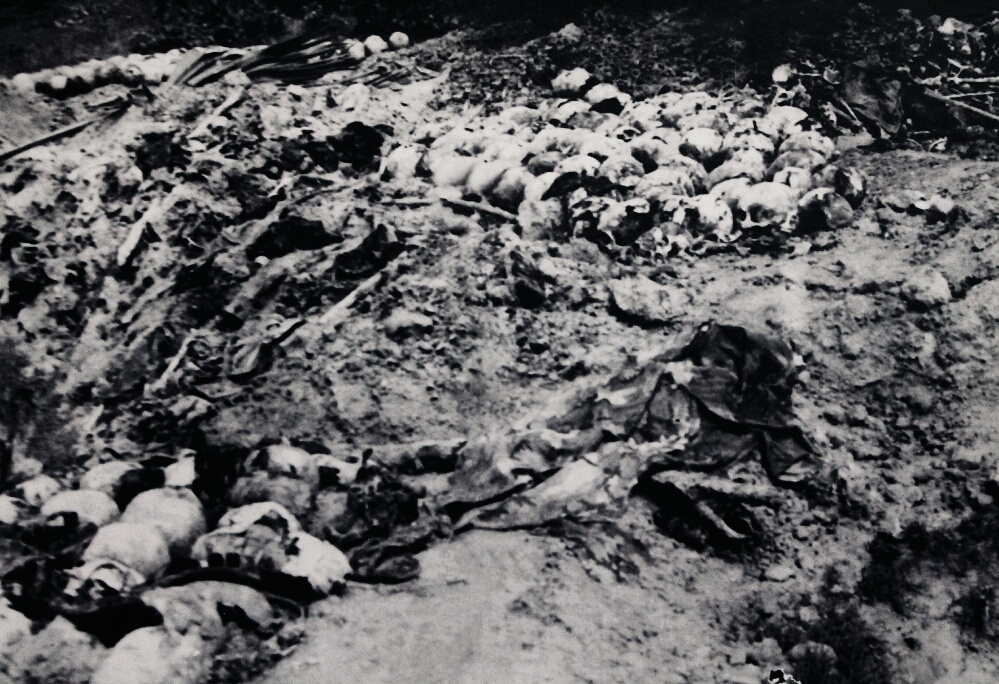 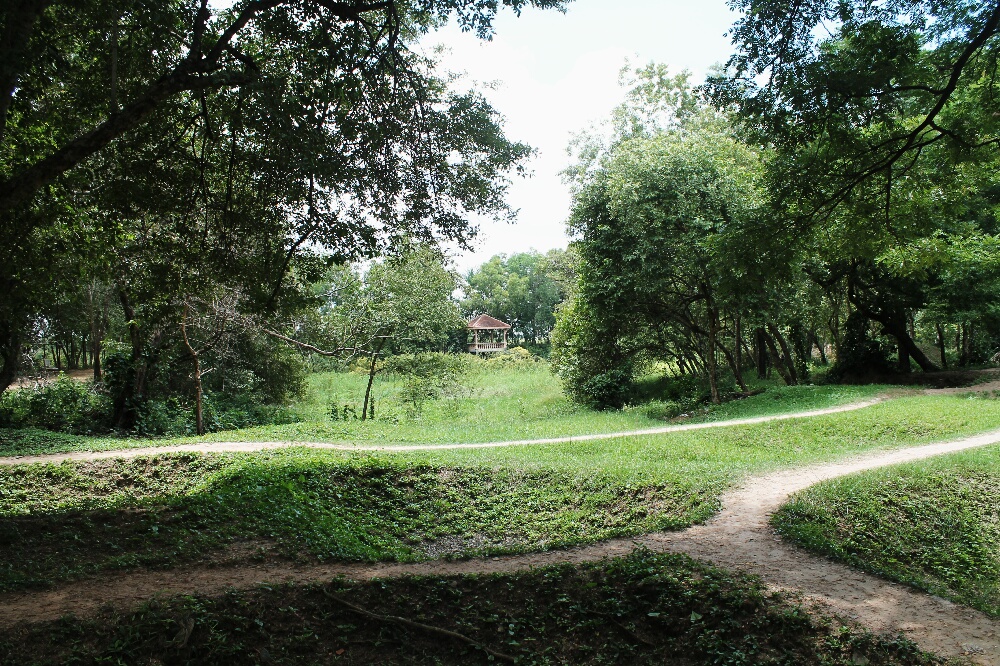 We made our way through with an audio guided tour hearing story after story, of people’s experiences, their stories of loss and survival during this dark period in Cambodia’s history. One of the most horrific sights, surprisingly not the row after row of skulls and bones stacked high on display, had to be the killing tree. This tree was dedicated to the killing of children. Guards here would take children by the ankles and bash them against the tree, while their mothers looked on. There were detailed descriptions of the brain matter and blood that once covered the tree, which is now covered in colourful bracelets. 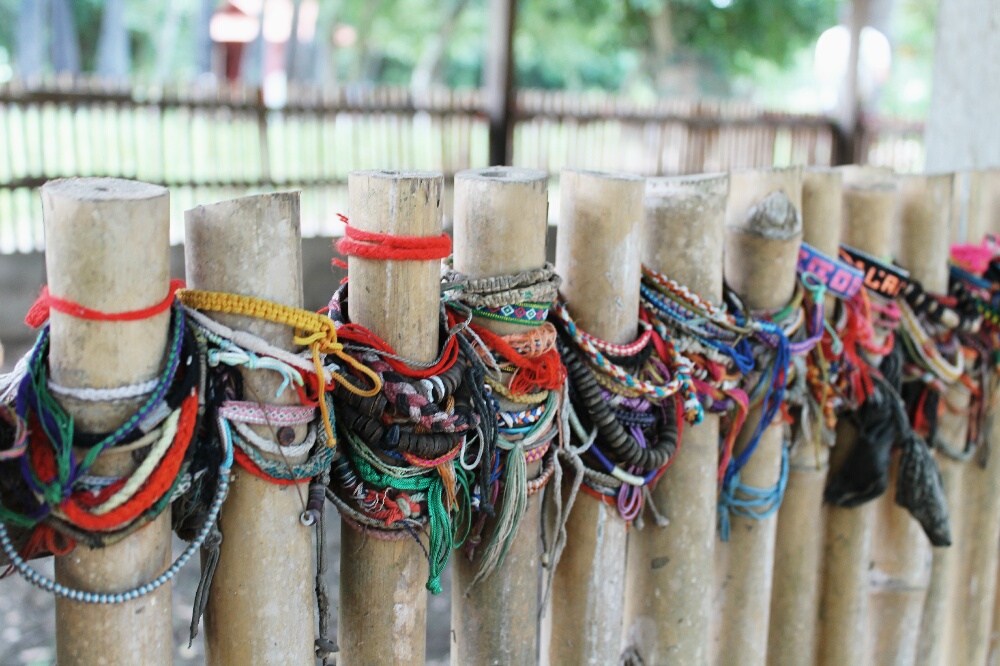 The second place we visited was the Toul Sleng Genocide Museum, aka, S-21. This was once a school filled with laughing children eager to learn, later converted to a security prison. It is estimated that S-21 had up to 20,000 prisoners of which only an estimated 14 survived. The prison was left in tact essentially as it was found, meaning there is still dried blood on the floors and walls. You can see from some of the pictures how dire the cells and living conditions were there. It’s incredible that only 14 people survived, or in that respect, that there were any survivors at all. 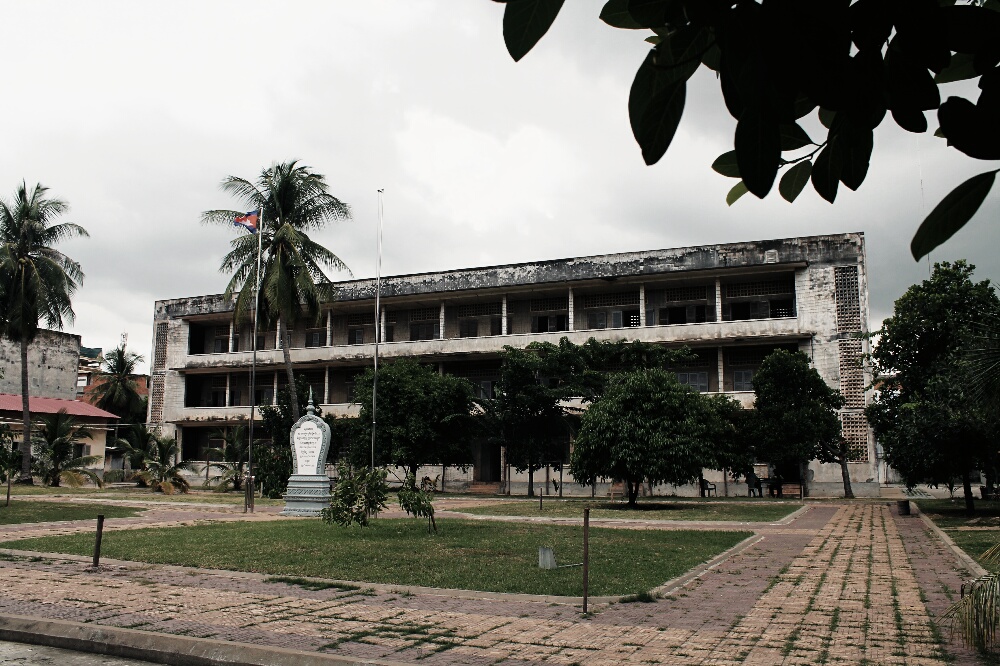 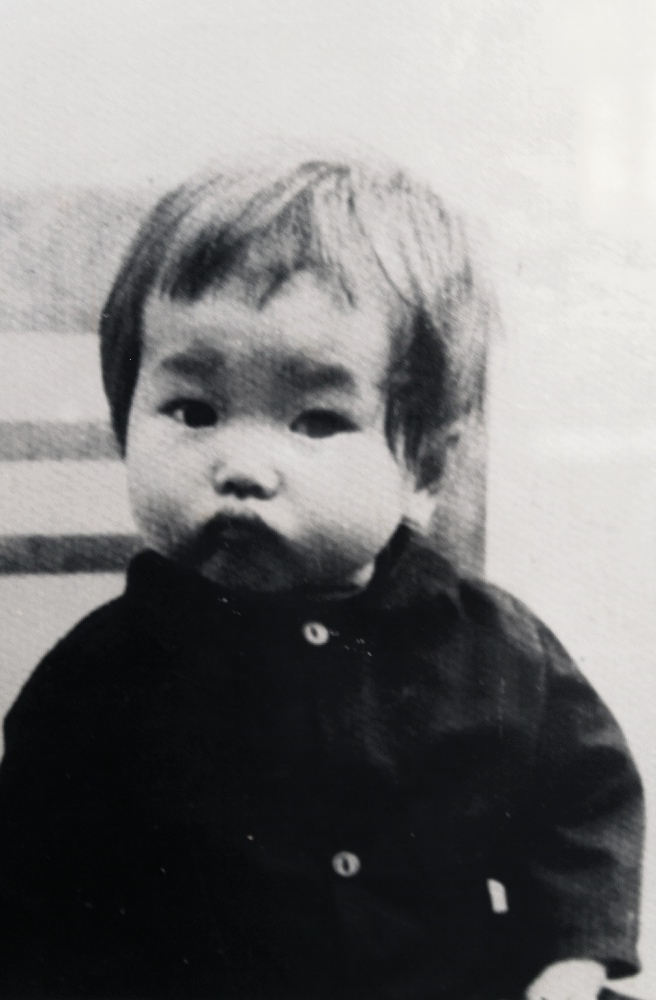 The whole experience was overwhelming and really put things in perspective. This was a pretty recent phenomenon and it made us realise that no matter your level of education or accomplishment, you are powerless against heavy weaponry and disillusioned mind sets. The country is obviously still struggling with this part of its history and it’s no wonder why.

It’s not all doom and gloom. Even with the tragic and still recent history, Cambodians are very strong people and have a strong sense of community. Plus, the main currency surprisingly is the US dollar, mixed with some change given in the Cambodian Riel. We aren’t quite sure why that is, but it does make it easier for us to wrap our brains around what we’re spending on a daily basis. Also, without sounding like complete lushes, the beer in most places is cheaper than water and soft drinks. It makes a nice excuse for sitting around and drinking jugs of the stuff. Cheers. 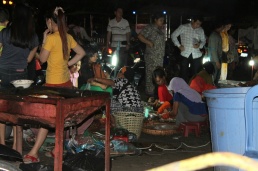 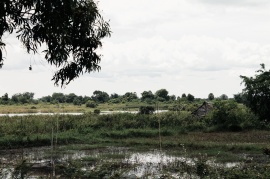 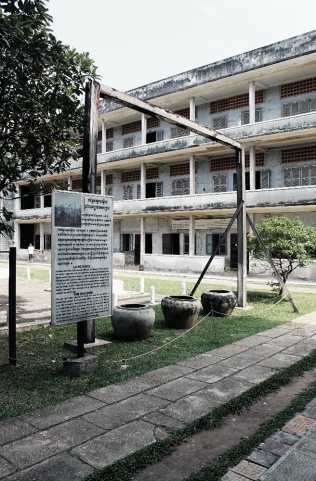 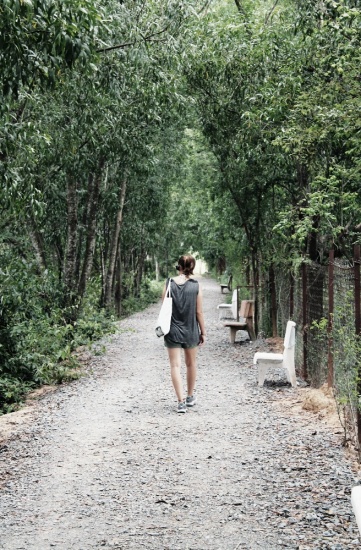 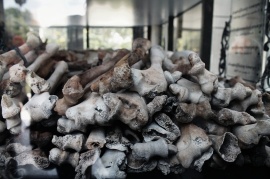 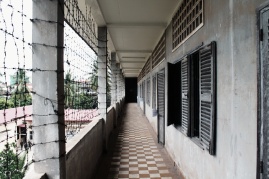 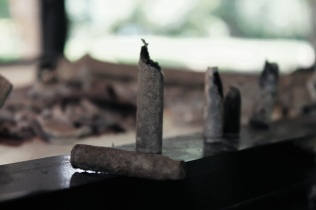 Next stop is Kampot,
Stephen and Katie