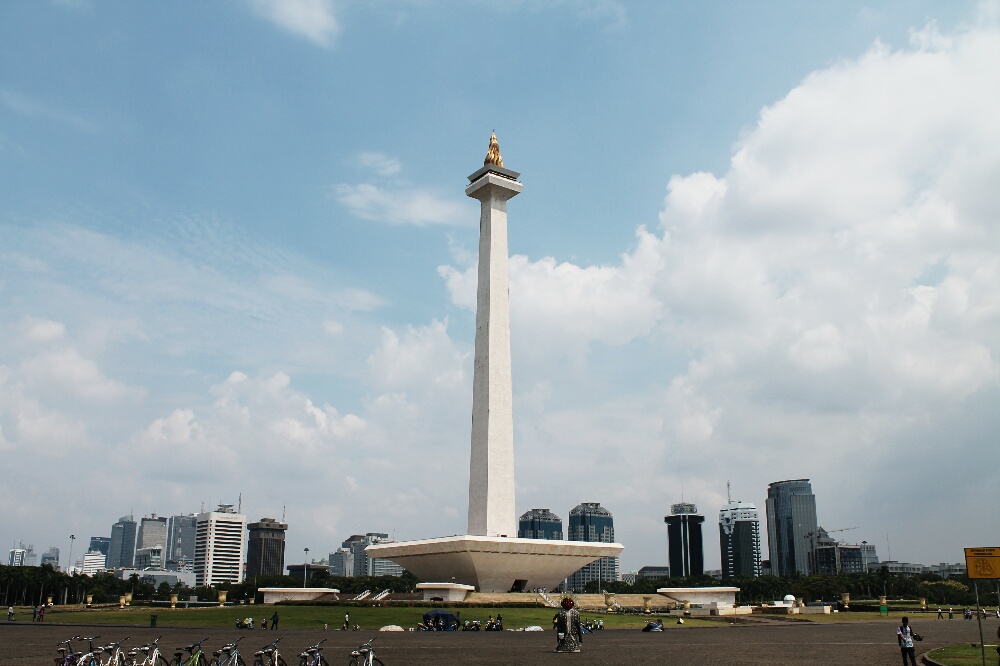 We landed in Jakarta safe and sound ready for a new adventure in another foreign land. We didn’t know too much of what to expect, as it was sort of a whim that we came to Indonesia so quickly after only spending 2 weeks in Malaysia.

Jakarta is the capital and largest city of Indonesia. We stayed near Pasar Badu, a frantic and interesting market strip which is close to several of the city’s main tourist attractions. We had been warned about the taxi services in Jakarta. Apparently there are only about two companies you can trust not to rip you off. Blue Bird and Express Taxis…but look out for the imitation ones as well. Unfortunately, for any readers where a first hand experience might help, we cannot help. We decided to walk to our hotel to avoid having to deal with being scammed. We just weren’t in the mood and now a 1-2km walk with our bags is of the norm. 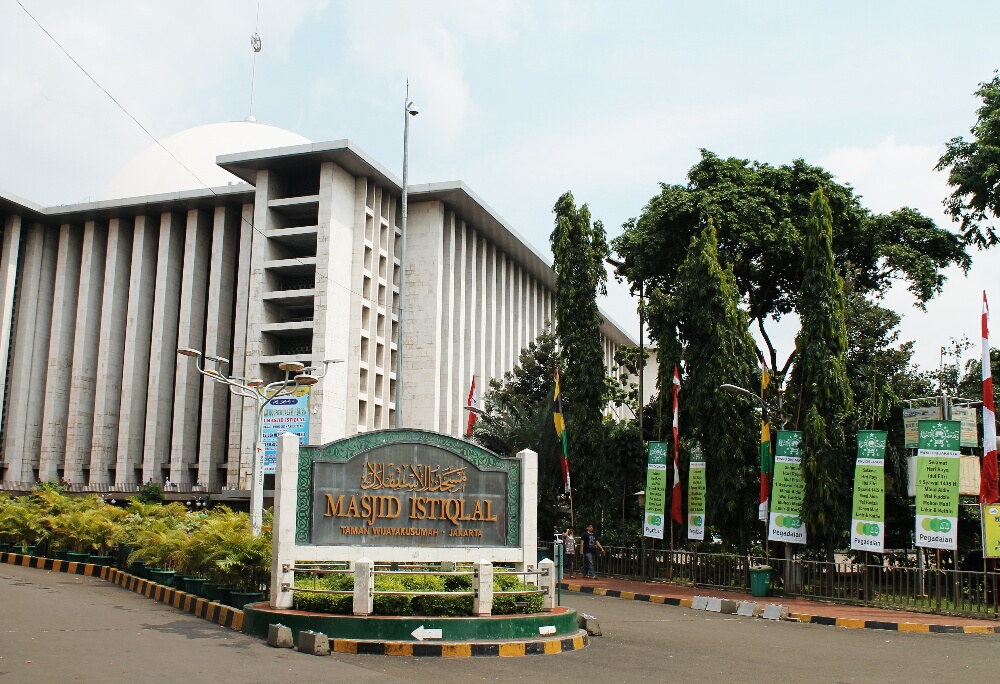 Our first stop was at the Istiqlal Mosque (Independence Mosque), the largest mosque in Southeast Asia. We received a free (donation expected) tour around the mosque. Before we went in I had to wear a robe which Stephen said was my Hugh Hefner robe.  Some of the men on the tour also had to wear robes because their shorts were cut above their knees. I have to say, their robes weren’t as fashionable as mine, very plain and heavy looking. Anyway, the tour was nice and we learned some facts. What we picked up on the most was that the mosque, obviously used for worship, also seemed to be a place to– picnic, catch up on phone calls, charge your electronics, dry your clothes, have a nap and read a book. An inside park perhaps where you occasionally point to Mecca and tell Allah how great he is. No judgement from me, that’s what they’re doing isn’t it. They do this five times a day which Stephen says ‘shows how insecure the god really is, most Christians don’t even go to church once a week’. Hope that doesn’t offend anyone. 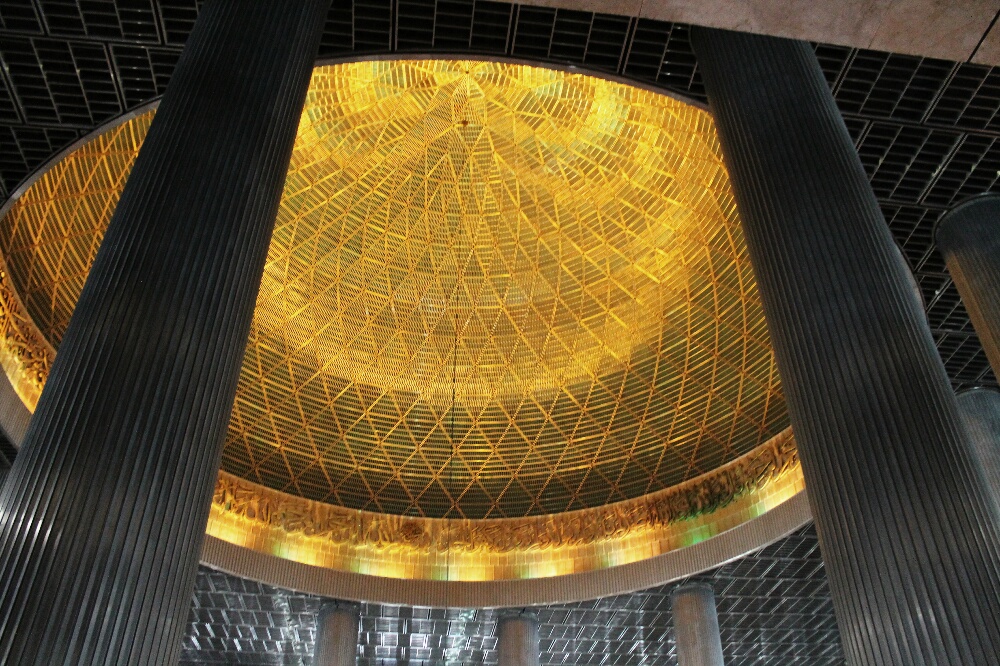 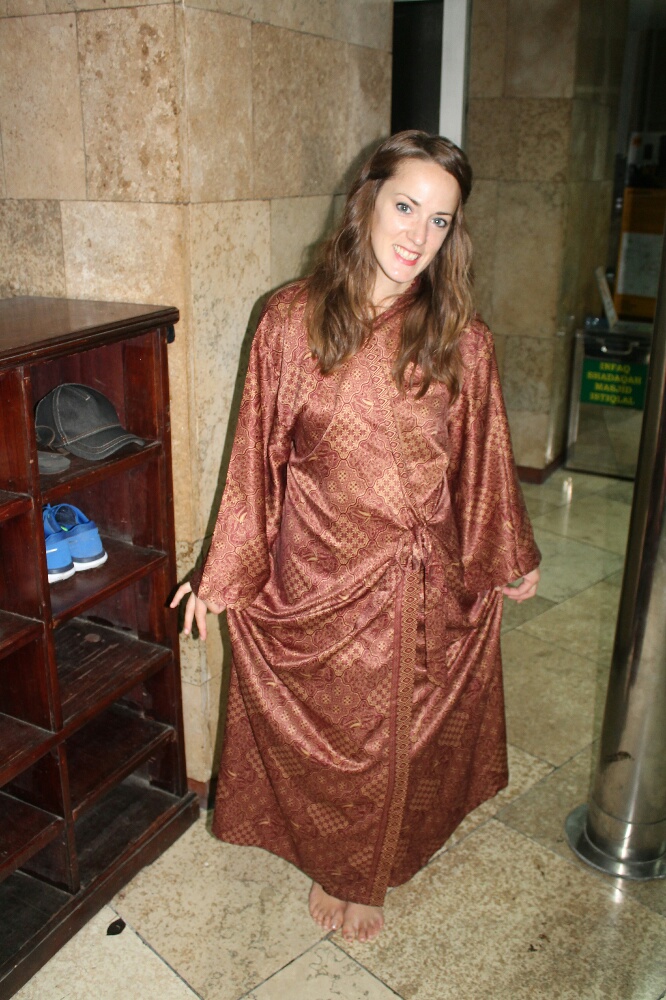 Directly across the street was a large cathedral. I’m not sure if that’s ironic, culturally advanced or what. No matter, it was right across the street. The building was impressive from the outside and inside. My favourite part was hearing all the birds chirping inside the cathedral, it really added to the ambiance. It was nice, especially so when you consider its singularity because of the country it’s in and the surroundings. However, when compared to cathedrals built in England, it wasn’t particularly grand, though enjoyable to see it. 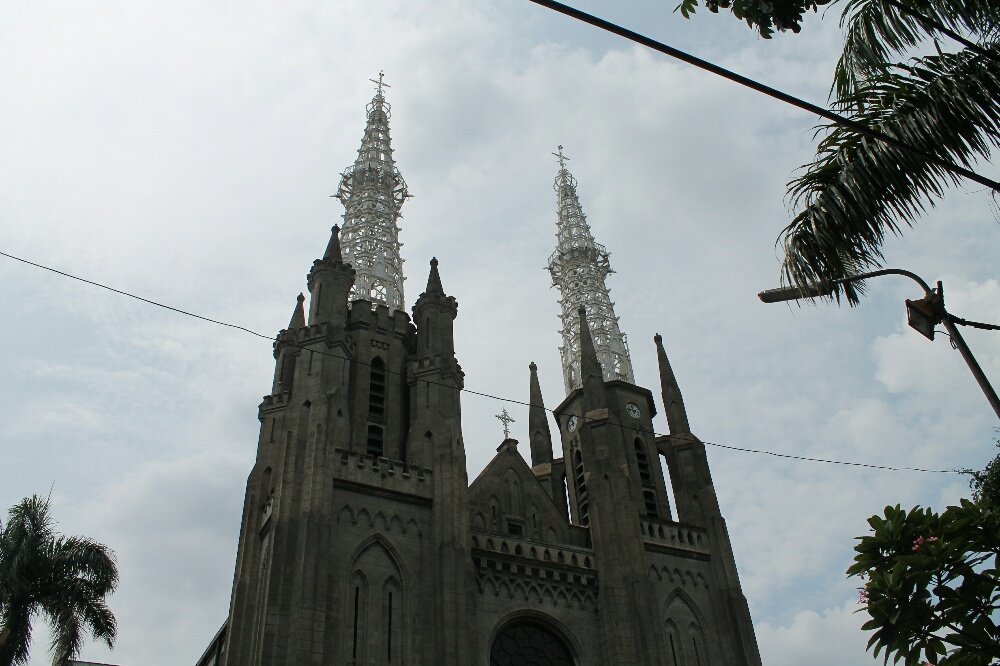 On the way to see the National Monument we were stopped and greeted by a man. He asked if we were heading to the monument and warned us that there was a 3 hour wait to get to the top. We immediately thought this was a scam and that he was gonna try to convince us to hop in a cab and head elsewhere with him. We were pleasantly surprised when we thanked him and he simply said his goodbyes. I think we have been tainted by information on the Internet about such things, as well as experiencing a few scams ourselves. It’s nice when it is just an innocent interaction. Indonesians seem very friendly, lots of people just say hello.

The monument was a very very tall pillar with a sculpture of a flame on top. We decided not to go to the top as 3hrs seemed a little excessive and Jakarta’s skyline isn’t particularly iconic. Besides that, we were on our way to the train station to see about getting a ticket to our next destination.

Trying to buy tickets online here can be a bit confusing. We found the sitetiket.com, which has been decent enough. The tricky part for us is that we arrived to Indonesia right at the end of Ramadan, the fasting month for Muslims. They are now raring to celebrate making travelling around a bit more difficult. It’s like their summer bank holiday weekend, or in the states what goes on for Memorial or Labor Day celebrations. Traffic is busier, public transportation is full and hotels jack up their prices.

One thing I noticed about Jakarta was that it was the first time outside of India that I felt a bit out of place because of how I dressed. When we walked through the market Pasar Badu, I felt like everyone was eyeing me up and down – men and woman. I was wearing a dress that cut just above the knees, a wider strapped dress exposing my shoulders and a touch lower cut but not a busty dress. By all accounts, this is a respectable looking dress and is not provocative in the least. However, when worn in a predominately Muslim island, I felt like I had nothing on at all. Luckily I brought a scarf out with me and I fixed it up to cover my shoulders, which seemed to avert a few eyes from staring at me with an air of distaste. I understand about respecting people’s cultures and beliefs, I had just assumed that being in such a big city, the rules were a bit more flexible than they actually were.

We had been feeling a bit sick of cities and wanted to explore more jungles rather than concrete jungles where we keep finding ourselves recently. For that reason, we decided to only stay two nights in Jakarta,  but managed to see quite a bit in that time.